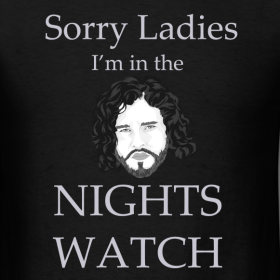 Making money online is always a challenge, and I came through yet another challenge when I planned on trying custom Tshrt sales.

Actually an ideal sales campaign would come as a mixture of better understanding of audience, a good T Shirt design and then most importantly, better promotional campaigns to reach the interested audience.

When it comes about online T shirt sales, I came through two different leaders, TeeSpring and SpreadShirt. So I decided to try both of these and stick with the one that worked best for me.

Although both these platforms were different in different case and are useful according to your use, I will try to explain SpreadShirt vs Teespring and let you know which one worked best for me.

Before starting a campaign, first you will need to choose a niche or a topic. As a game of thrones fan, I decided to make a T-shirt design for Jon Snow, one of the most loved character in the series.

I first started with Teespring. I started the campaign and made the T shirt available for public for 19$. What I came to know was you need to choose number of minimum sales of the campaign you expect before you start the campaign and the base price is decided accordingly.

I started a Facebook ad campaign, targeted people who loved Game of thrones and Jon Snow. Fortunately after spending 45$ in advertisement, I was able to make 11 Tshirt sales, hence making a net profit of $43. I could say this was an ideal Facebook campaign, I will be explaining my Facebook campaign tricks below.

The campaign went pretty well, however it was a kind of bargain. If I was not able to make 10 sales in time, all the investment on Facebook ads would result into loss.

If the campaigns did not meet its target, Teespring would refund every sales, resulting a total lost of time and money that was invested in advertisement campaign.

Spreadshirt was another great option for me to try out my first Tshirt campaign. Alike Teespring; Spreadshirt was easy to use and you could choose from a wide range of available design, or create your own. I

Similar to the campaign that I used in Teespring, I decided to work with Game of Thrones and tried to sell similar campaign with similar Tshirt because first I wanted to know what performed best for me and stick to the one that gave me better result.

So I started an advertisement campaign , similar to the previous one. I could sell 9 Tshirts after spending $35 on Facebook advertisement. That made me a profit of 24$.

Although this was relatively low profit that what I could have made from Teespring(18$ low at the price of 2$ per Tshirt), this was certainly a low risk approach.

Imagine if you could not meet the campaign target, if you could just sell 9 Tshirt instead of allocated 10, Teepsring would refund all your purchases, so you would face a direct loss of money you spend on advertisement, while with Spreadshirt, you would be risk free in this case.

However a direct calculation was not the only factor in this case to calculate profit. I could sell 9 Tshirt advertising with 35$ on Facebook. This could happen because I could feel that Spreadshirt had higher conversion rates, thanks to the option where people could choose from a wide range of colors.

However this is not the case every time where Teespring could get you lesser base price. There are certain case studies in the internet where Spreadshirt has more profit per sale than Teepsring.

But I could guarantee you that when you confident that you could sell large number of Tshirts, Teespring could be best option in the market as the base price goes lower as the volume increases.

However Spreadshirt was risk free and I could not guarantee high sales on my campaigns, so I decided to stick with Spreadshirt.

As a round up, here are some advantages that Spreadshirt has over Teespring.

1. Spreadshirt gives your customer choice of colors while Teespring does not. It is not certain that everyone loves a specific color, if you could give your customer a wide range of color options for their Tshirt, this would certainly result into more sales as it did in my case study. I could sell 9 Tshirt from 30$ spent, probably better conversion as compared to the Teespring campaign where I sold 11 shirts with $45 investment.

2. In my case, Teespring could offer me relatively lesser base price. Base price means the cost that the vendor would take per Tshirt sales, however this is not the same case all the time. I have read some user’s experience where they claim Spreadshirt offering better base price than Teespring.

However when its about a bulk campaign, the base price in Teespring goes lower as the number of Tshirt goes high.

3. Spreadshirt is risk free, in the sense that every Tshirt sales will reward you your profit, unlike in Teespring, you must meet your target before you could be paid out.

However, you must know the fact that these two are completely different platforms. Teespring is a crowdsource platform which means you will get relatively cheap base price with Teespring when you work in bulk while Spreadshirt is direct to print provider.

Most importantly, Facebook campaign was the main reason that I could get return of my investment. An ideal marketing approach could only lead to successful campaign , either you use Teespring or Spreadshirt.

Previously I have talked about how I used Facebook ads to target visitors in my website, but this is different case.

I had a Jon Snow Facebook page with 200 likes, I just started it some time back and then forgot about it, however this remained useful for me this time.

I made a post on the page and started to promote it with Facebook advertisement. First I created the post and targeted it to Game of Thrones and Jon Snow male fans. Male because the Tshirts were only designed for male.