At times when low end mobile phones ruled the market, Nokia was the only mobile brand that people used to trust without even thinking twice. Samsung, the leading brand in smartphones, had no fame in the market until high end devices began to steal the hearts of people.

Anyways this post is to compare some specifications and features of the leading smartphone, Samsung Galaxy S3 and the upcoming Lumia series handset from Nokia (expected to release in Nov 2012) namely Nokia Lumia 920, which is regarded as the best smartphone in the world. 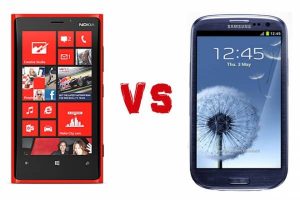 Both the smartphones are very well designed and its pretty hard to judge the best. Comparing the display, Samsung Galaxy S3 has a 4.8-inch super AMOLED display whereas the Nokia Lumia 920 has a 4.5-inch capacitive touchscreen.

Both the phones has 8 – Megapixels rear camera but S3 has a better front camera when compared to Lumia 920.

Galaxy S3 and Lumia 920 has an internal memory of 16/32/64 GB and 32 GB respectively. The lumia handset doesn’t have a card slot to expand memory whereas galaxy S3’s memory can be expanded upto 64GB using a micro SD card.

Other features common to both:

Samsung Galaxy S3 is no doubt a winner as Lumia 920 is expected to hit the markets in Nov 2012.

Now its your turn…

Can Nokia steal the hearts of people with their upcoming Lumia 920 handset?