Yesterday at an event in California, Apple unveils its much awaited 7.9-inch iPad variant under the name iPad mini. This articles compares the Apple iPad mini with its very strong competitor – Google Nexus 7. 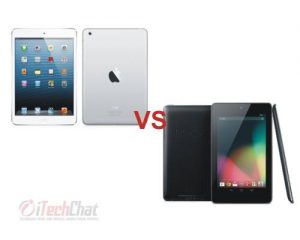 Design and Display:
The design on the newly launched iPad mini is much similar to the iPod touch. All you need to do is to imagine ipod touch in your mind and blow it up to measure 7.9-inches in size.

Processor:
iPad mini is equipped with a A5 dual core 1 GHz processor while Google Nexus 7 has a NVIDIA Tegra 3 Quad core 1.3 GHz processor.

Storage:
Google currently has 8 GB and 16 GB variants of Nexus 7 where as iPad mini comes in three variants of 16GB, 32GB and 64GB respectively.

while Google Nexus 7 costs around 200 USD for 8GB and 257 USD for 16 GB variants. However a 32 GB variant is expected to launch soon at the same price tag.

Conclusion:
Its pretty hard to conclude as both of the tablets are best in their own class.

Lets leave this to you !

Which is your favorite? Is it Apple iPad mini or Google Nexus 7.