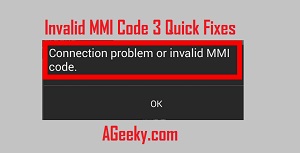 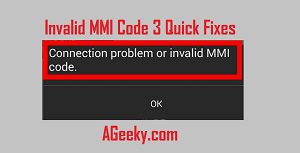 USSD code running Invalid MMI Code can be fixed by following these steps. Keep in mind that you follow these steps just as they are written here. Try things that aren’t there could lead to even worse disaster. So following are some of the easiest methods to fix this Invalid MMI Code ZAIN problem.

This is one of the easiest and most effective method to fix this issue with different android smartphones. All of us is familiar with the safe mode of electronic devices. This safe mode helps us in many ways. It also helps us fixing this problem. Switching to safe mode will stop many unnecessary processes that could cause this problem. Now you can check for the app that is causing this problem. Now you can look for the culprit that is causing this problem using error scanner app. Or, you can also do that by dialing error checking shortcuts. Those may vary with the device you are using such as *135# so take care of that.

It is always better if we stick to the easy fixes. That’s what exactly I am doing in this post. So, another easy method is here to fix the issue. All you have got to do is to add a comma at the end of this prefix number. You must be like, what? But yes this is a very easy fix that works for many people. This comma will help you to execute or end any error that is causing this problem. All you have got to do is putting a comma or any other corresponding symbol. And there you go, done with it in a minute.

What could be easier that restarting your phone? Yes, this is definitely a fix for this problem. Though, restarting just for once might not work. If it doesn’t work by restarting once, try it over and over again. In many cases, this method seemed to work perfectly fine. Just hold down the power button until the phone goes off. Now restart it again at the very moment. I really hope that this will fix the Invalid MMI code problem. In future, I will come up with more solutions that will help you. Till then you can start working with these and they are going to work.

Don’t forget to leave us your feedback in the comments section. This is what helps us improve the quality and work of our site. Also, ask anything if you have questions in your mind. I really hope that this article helped you.