After the launch of Motorola Moto G in India, the company is here with its latest flagship device, the Motorola Moto X, which is priced Rs. 23,999. In the same price range, we also have the popular Samsung Galaxy Grand 2 (priced Rs. 22,999). This article gives a comparison of the two phones and gives a conclusion based on their performance and features. 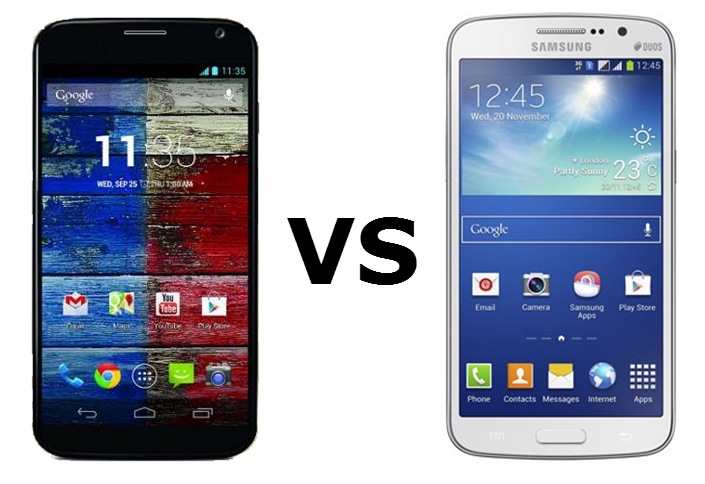 The Samsung Galaxy Grand 2 comes with a 8 MP rear camera capable of taking photos of up to a maximum resolution of 3264 x 2448 pixels. It also has a 1.9 MP front camera, a LED flash and an autofocus feature.

The Motorola Moto X boasts a stunning 10 MP rear camera able to take pictures of a high resolution 4320 x 2432 Pixels with its ClearPixel Technology. A 2 MP front camera and comes with both the autofocus and LED flash. Both phones offer a panoramic mode feature too.

The Samsung Galaxy Grand 2 has a microSD card slot and supports up to 64 GB card, it also has a 8GB Internal Memory and 1.5 GB RAM.

The Motorola Moto X has no Memory Card slot but has two models each coming with a specific internal Memory, a standard 16 GB and a 32 GB model both having 2 GB RAM.

The Samsung Galaxy Grand 2 has a Quad-core 1.2 GHz cortex A7, Snapdragon 400 processor and comes with the Android 4.3 (Jelly bean) Operating System.

The Moto X has a 1.7 GHz dual-core Pro Snapdragon Chipset and runs the Android 4.2.2 Jelly Bean (Upgradeable to Android 4.4 KitKat)

The Samsung Galaxy Grand 2 has three types of flavors, the G7100 single sim slot and HSPA connectivity, the G7102 DUAL SIM support and HSPA and the G7105 model with a single SIM slot plus LTE connectivity. They both support the Quad band GSM/GPRS/EDGE/3G. It also has Bluetooth 4.0 and Wi-FI support.

The Moto X offers the Quad band GSM/GPRS/EDGE/3G and LTE compatibility. It uses Bluetooth 4.0 and has WI-FI support.

So, if you were given a choice between the two smartphones, Which one would you choose?