Tablet market grown a lot in the past few years. Every laptop and Smartphone brand has launched its tablets with latest features and operating systems. Samsung and Apple have been the most selling tablets in the market. But with Microsoft power, Surface pro is the next generation tablet with extra fast and efficient performance. Microsoft surface pro was launched earlier this year and this time Microsoft promised better processor and interface. It has a laptop power and works better than all of the cheap laptops and desktops and in most cases expensive laptops as well.

Do Check: Top 3 Tablets in India 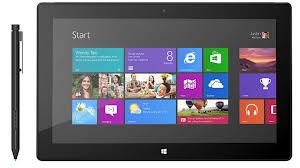 Microsoft surface pro promises the best performance with the 1.7 GHz Intel Core i5 3rd generation processor. Which is more than any tablet released till date. This gives users fast usage and better performance than the other surface tablets. It supports a 4 GB, 1600 MHz DDR3 RAM, which gives the processor the power to perform better than android or Mac tablets. For the hard drive. Microsoft has given 2 options in two versions of Surface Pro tablets. It comes with 64 GB and as well as 128 GB hard drive. Graphics are supported by Intel HD 4000 and this gives Surface Pro better display.  Surface pro has a screen size of 10.6 Inches. Screen resolution of surface pro is 1,920 x 1,080 pixels and it also supports 2,560 x 1,440 pixel resolution on when attached to a wide screen.

Microsoft launched windows 8 with the launch of Surface Pro. And all the versions of surface have windows 8 operating systems. The touch cover in earlier versions of surface tablets is now replaced by the touch cover. This touch may not be easy to use earlier but when the user gets used to this type of keyboard, it is very easy to use. To change this tablet into a laptop, the user doesn’t have to use laptop accessories.  The surface pro also comes with the surface pen which can be used for sketching and other functions. This pen is easy to use and smooth when writing or sketching. Surface pro has mini port to support connectivity with external screens and with the use of an adapter  it can be attached through HDMI cables to many devices. It also has a 3.0 USB port to support external hard drives and other USB devices. It has a built in speaker and microphone. It is wi-fi enabled and connecting to internet devices is very easy through Bluetooth for data transfer.

At last, it is not hard to say tat Microsoft Surface pro is the best tablet in the market today and has all the features that makes it better than many laptops in performance.

Serven works with tablet store and writes on all the latest tablets launched by the major brands. he is also writing about tech news, cheap laptops UK and mobile apps.