Nokia X, the company’s first Android smartphone was launched in India yesterday with a price tag of Rs. 8599. At a similar price, we have a smartphone from the house of Samsung namely Galaxy S Duos 2.

This article compares the two smartphones on the basis of their features and specifications thereby concluding the best among them. 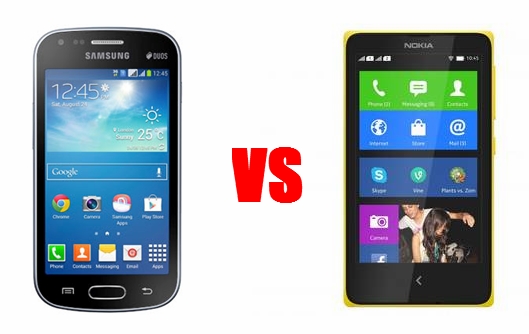 It has a rugged design and remains undamaged even after falling on tough surfaces while Samsung Galaxy S Duos 2 has got nothing like this.

It features a 3 mega pixels fixed focus camera on the rear with 4x digital zoom. The handset lacks LED flash and even front camera.

Both the smartphones has Dual SIM support with Dual standby feature. They also have 3G, WiFi, Bluetooth and micro USB port. The Galaxy S Duos 2 has GPS with A-GPS support where as Nokia X has only A-GPS.

Based on the above comparisons, we can conclude that the Samsung Galaxy S Duos 2 is better in features like Camera, storage and performance.

The X, on the other hand, claims to have good battery backup, a rugged design and mostly meant for those people who are not much fanatic about apps.

So, what’s your opinion about the newly launched Nokia?