Before you decide who will win the battle, read the comparison between the old giant, Galaxy Ace and new comer Lumia 510. 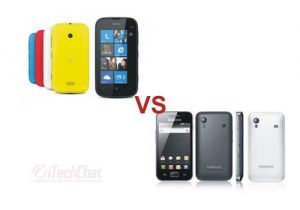 Both the smartphones are fitted with a 5 Megapixels auto focus camera but the
disadvantage with Lumia 510 is that it lacks flash.

Lumia 510 runs on Windows phone 7.5 (Mango) OS (upgradable to 7.8 in near future) where as Samsung Galaxy Ace runs on Android v2.3. However android lovers will not think twice when they are required to choose between the two.

Here the Galaxy Ace has an edge over Lumia having an internal memory of 158 MB (278 MB RAM) that is expandable upto 32 GB using a microSD card while the Lumia 510 has 4 GB internal memory (256 MB RAM) leaving no room to expand.

Also the Nokia Lumia 510 comes in White, Cyan, Black, Red and Yellow colours but when it comes to the Galaxy Ace, choice is limited to only Black and White.

Nokia Lumia 510 being a brand new handset has some uniqueness in it where as the Samsung Galaxy Ace, as you all know, is a good handset with an excellent track record.

If you were given a choice to choose from the two, which one would it be?