Sony recently announced its flagship Android Smartphone In January 2013. With its 1,920 x 1,200 pixels full HD display, a ultra thin and ultra light weight frame measuring only 6.9 millimeters thick and weighing in at 495 grams, the Sony Xperia Z Android tablet is the thinnest, lightest 10-inch tablet in the world. The 10.1 inch slate is riding on the android jelly bean (4.1.2) platform with the upgrade to the 4.2 jelly bean platform available. The Sony Xperia Z tablet follows closely in the design ethos of its predecessor, the Sony Xperia Z Smartphone. The design of this tablet makes it stand out from the other tablets in the market. Its impressive design makes it thinner than the Apple iPad Mini. Available in white and black, the tablet has been made to meet the demands of all Xperia lovers. 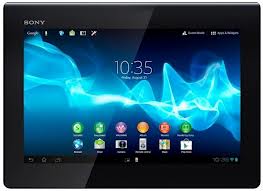 The tablet comes in very strongly on the performance front. Powered by a 1.5 Ghz quad core processor with a 2 GB ram, it promises to deliver greatly on the performance front. Furthermore it comes with an internal memory of a whooping 32 GB. It also adds a feature which to Android feature tablet fans will be a breath of fresh air, its Micro SD card slot implying its expandable memory. A feature not commonly featured in many tablets phones.

The rear facing camera on the Xperia Z tablet is a thing of beauty. Its 8.1 megapixels with a back-side illuminated sensor which helps to capture images even in times of low light is a major complement to the phone. The tablet also has a front facing camera with 2.2 megapixels for video calls. The tablet also comes with a non-removable battery of reduced size of 6000 mAH. The smaller battery in the tablet is hoped to be as power efficient given its unusually small size. Furthermore, the Xperia tablet guarantees users an unparalleled experience in the tablet comes in the WI-FI only and the WI-FI LTE variants.

The tablet further promises to come in handy for the users. With its dust proof screen, the tablet is also water proof to depths of up to one meter and for periods of up to thirty minutes. The camera further comes with the famous Sony features of geo-tagging, touch focus; face detection, image stabilization, HDR and sweep panorama.

The superior design of the Xperia Z tablet is its best angle. The ultra thin tablet is easy to hold and use offering the user a unique experience. The user experience is further enhanced by the anti-finger coating advanced screen. This means that you can use the tablet as you wish without worry of your finger prints smudging all over the screen. The superior Opti-contrast panel by Sony offers a unique thrill given how clear and crisp images are visible from any angle both indoors and outdoors as the screen reflects less light. Furthermore, the innovative sound solutions from Sony ensure that the 3D sound clarity and quality is up to scratch.

The Sony Xperia Z tablet will now be available by May 2013, in India. Price of which is yet undetermined ! The company says that it’ll announce the price close to its availability.